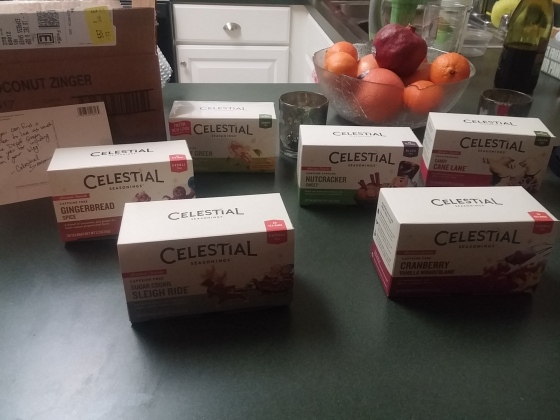 Three weeks ago I mentioned how Celestial Seasonings sent me a care package of teas revolving around the holidays and winter season.

It was in response to this selection in this post where I said I wasn’t thrilled with it.

Well the last three weeks of recaps showed that one tea was just an aberration. As these teas have all been good-to-great.  And the reviews for those teas can be found here, there, and, everywhere.

Like I stated previously,  Celestial did not pay me or instruct me to automatically praise their teas to the atmosphere.  All views are my own and fortunately I will say they’ve been palatable and exquisite.

This brings us to the Cranberry Vanilla Wonderland.  I saved this one because the others were more in line with a holiday theme which has sadly concluded for 2015. 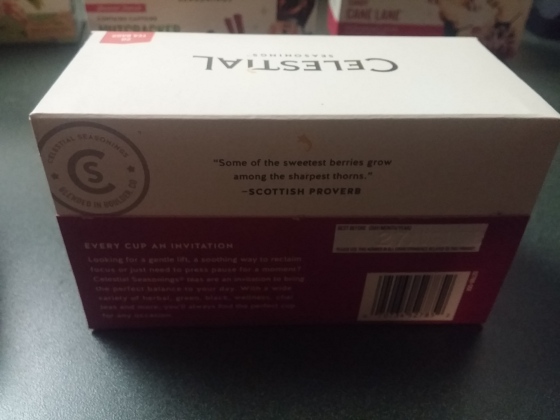 Funny how things work out, it does finally feel like winter now in the Baltimore/Washington area.  All it took was for me to write about an apropos named tea and the weather got cold.  Yeah that’s it.

When I first opened the box, the cranberry smell was intoxicating.  Shortly thereafter I got a whiff of the hibiscus and roobios.   I’m guessing those are easier to figure out from experience.  But the cranberry really overpowered everything else. 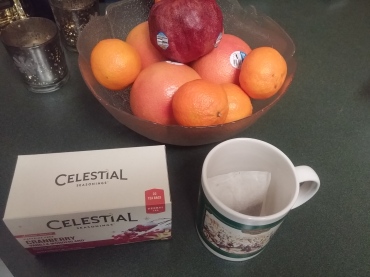 During the brewing process, the color changed rapidly.  As soon as I poured the boiled water into my cup, it was magic.  And the fragrances were off-the-charts.

I love cranberry.  I especially love it in dry format and this tasted more like drinking it in a heated juice form.  If you think that’s a weird description, well it is. I had my reservations after the first couple of sips but I was won over not soon thereafter.

I enjoyed a little fruit with my tea, as it only seems fit.

I wouldn’t call it my favorite.  But I really like this for the cold and would gladly make it an iced tea during the warmer months ahead.  I don’t want to think too far ahead but it’s something to look forward to.    Brewing methods for this, as well as other teas can be found in at the bottom of each choice.

What is a Juniper Berry?   I got nothing.  And even after researching it, I still don’t have anything.  But it’s listed as an ingredient.   It’s something I will want to delve into again.

I think what frustrates me is I see so many amazing spices and the like listed, and I can’t detect them.   I shouldn’t try this hard but the orange peel, chamomile, and (at times) the vanilla was hard to come by for me. Thankfully, the cinnamon meshed well with the berry. All the more reason I need to brew this again.  A follow-up may be forthcoming, if not then I’ll prepare it in iced-tea form for the Spring as promised.  And I’ll write about it then.   This is compelling. 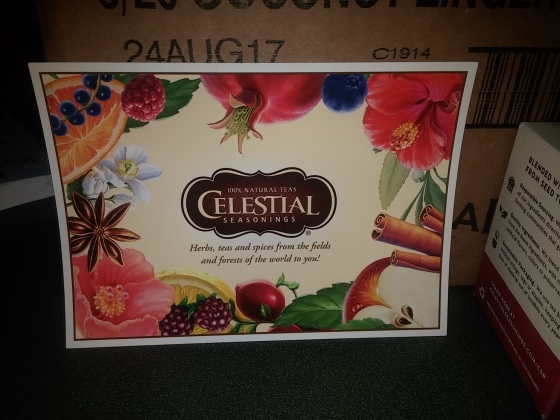 I don’t want this to be the end.  I could write about Celestial Seasonings forever.   I am so grateful they sent me this package with a personalized note.  It validates much of what I’m doing.  And I can only hope I will write about them again.  And soon. 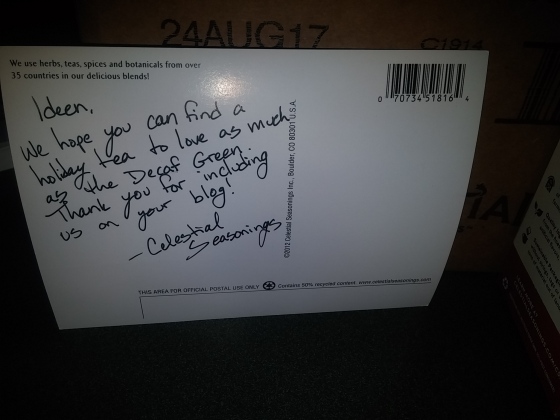 The fact they got in touch with me personally speaks volumes.  I have that much more affection and an affinity for their brand.  It will lead me to purchase more of their teas that I may not have otherwise wanted to or gave a second thought to. Now I’ll be scoping them out at my friendly, neighborhood store habitually.

I will remember this string of teas and posts very fondly.  I intend to sustain these good vibrations as we continue into the new year.

15 thoughts on “Thank You Celestial Seasonings”