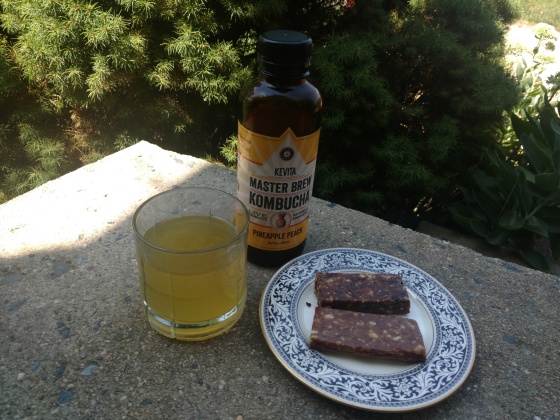 Of course the culture I’m referring is the probiotics and all the goodness found in the Master Brew Kombucha by Kevita.

What else would I be talking about?

I have a few people to thank for getting me into Kombucha, and it has enhanced and expanded my horizons, and given me some more content for this blog.  And I’m all for new stories (here are my previous write-ups on Kombucha) and experiences

My mind was set on writing about this amazing beverage, but with which brand and with with flavor(s) was to be determined.  Even when I have some semblance of a plan, I rather still keep it fresh and as meaningful as possible.

So in browsing the natural and organic aisles of my local supermarket, I noticed the list of companies making Kombucha is rapidly expanding.  I’ve even met some folks that are in the process of brewing themselves.  That might be a topic for another time but let me not lose focus.

I had seen Kevita in many grocery store refrigerators, and paid it plenty of mind.  It’s been in head to sample a couple of there Master Brew’s to see if they’re in fact masterful.

For this post I decided to make it a two for one and try two of the more summery flavors. We still got a long season to go ladies and gents so I want to make the most of it. 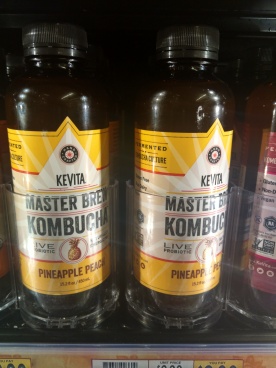 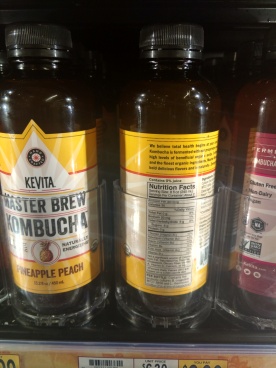 First up is the Pineapple Peach.  Seriously, does it get any better?  It’s quite possible, no. Now many of us have had fruit cocktails or fruit punch drinks that tend to mix one or more fruits too many.  And that’s drinking unnatural and products likely high in sugar, among other nasty additives.  And with all that sometimes these big companies still tend to mess up something so simple.  Not here. 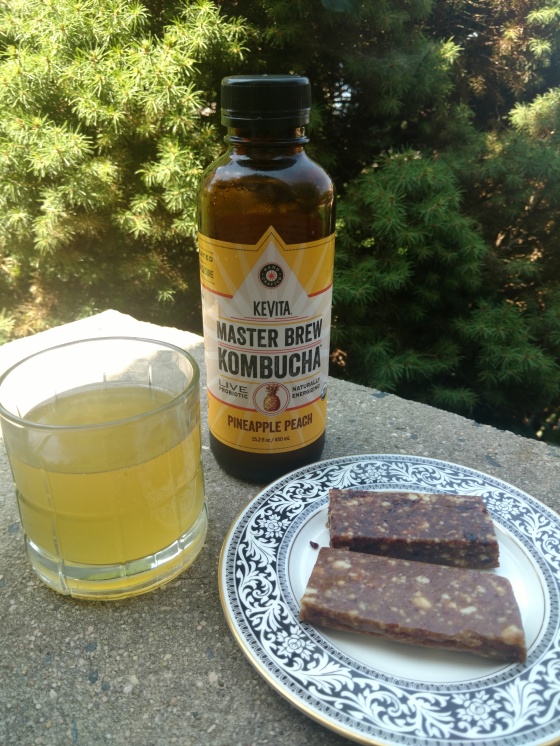 This was awesome.  And this is one of those kombucha drinks that if you’re not careful, you can finish off rather quickly.  I’m of the belief that these drinks are meant to be savored, not chugged and rushed through.  My body is still getting used to drinking this, so I believe in taking it slow as it gets adjusted to change.  That’s just an opinion and observation I’m making for myself.  You may think and feel different, and that’s what makes this tea and kombucha journey so exciting.

Pineapple and peach were merged together to create something so colorful, so delightful, and so invigorating.  I had about half of my bottle.  The other half I will enjoy soon.  But I want to appreciate the beautiful color and texture of this Master Brew.   Seriously, isn’t this so radiant?

Kombucha can go with anything but sometimes I like to have it with nothing.  This time I had it (again slowly) with a couple of equally fruitful and powerful health bars, perhaps you heard of them.  Yes Larabar is awesome too. 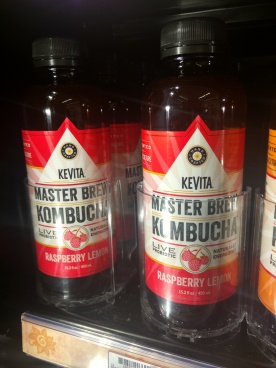 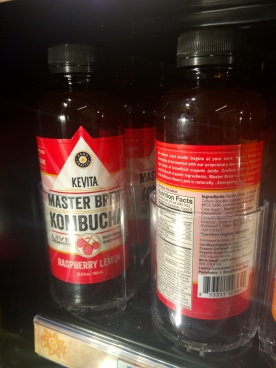 Next up was the Raspberry Lemon.  This tasted more like what you’d expect from a kombucha.  It’s not as easy to drink in my opinion.  And while I still thought it was alright, it’s nowhere near the Pineapple Peach.  Some going are going to love it, but this is one that took a little more time for me.  And in a way that’s a major point of this.  It’s not supposed to be rushed, but something about this flavor combination didn’t hit me like the first one.  And that’s quite ok. 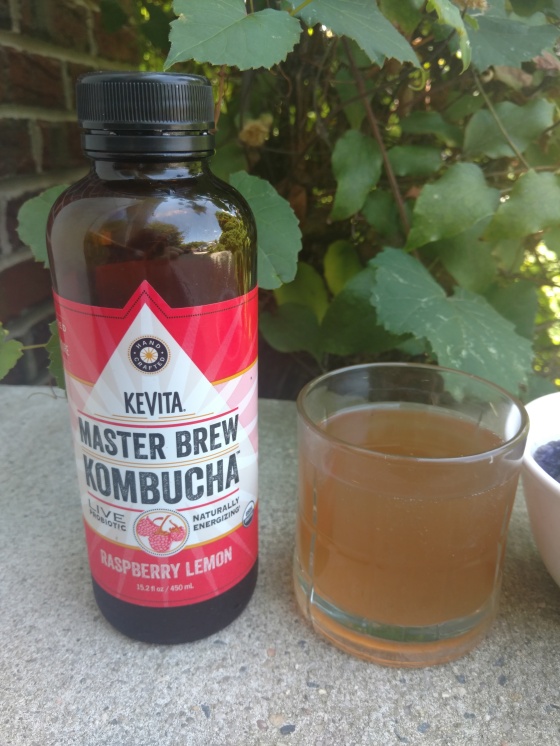 This was more for display, but you can see the Raspberry Lemon is paired with purple heirloom chips.  The Larabar’s is what I truly feasted on.  They’re so yummy. 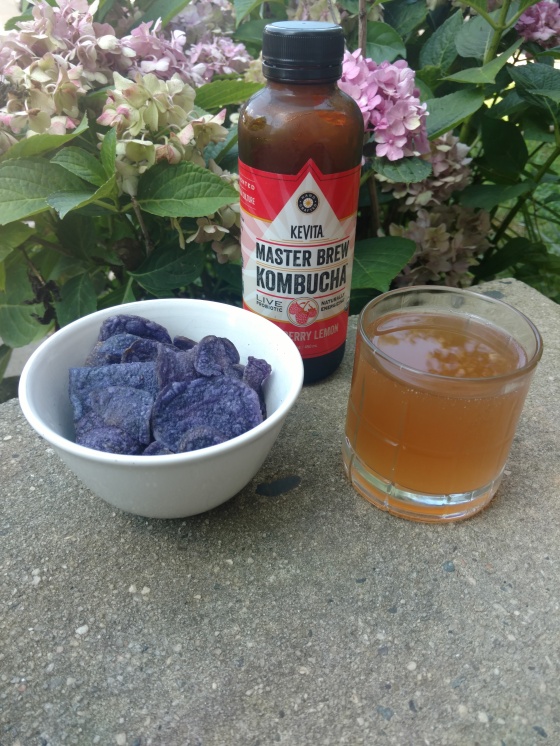 Since the kombucha thing is still so new to me, I want to revisit Kevita much sooner rather than later.  They have a plethora of flavors I want to try, and there’s no time like anytime, or something. 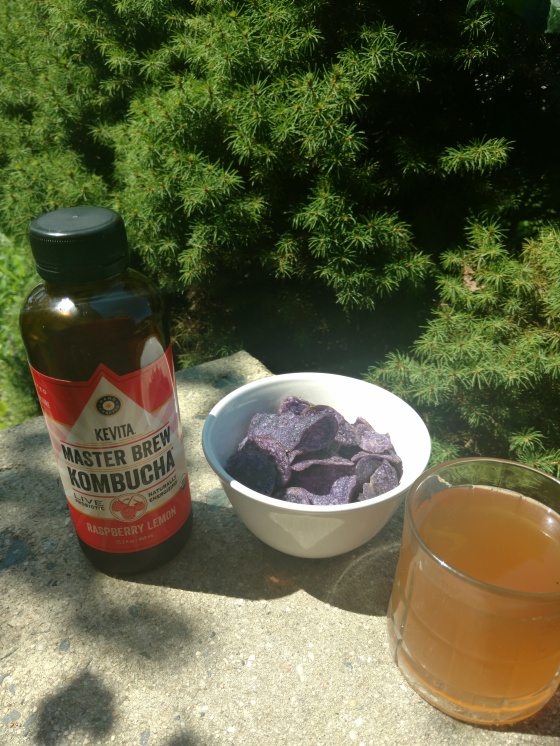 Kevita is easily accessible in your area and here’s the link to find it near you.

Here’s a little local culture for you, and the live stuff too.

This is all good stuff.  Culture can be your friend, and this is one instance where it absolutely is.  I’d love to go it again.

Come to think of it, there will be likely be more kombucha next week from a different source, and source energy.  And I’m so excited.

3 thoughts on “This Culture Is My Friend”

Follow Tea Is Fun on WordPress.com
Join 4,357 other subscribers