This week I may be cheating just a little, or I’m just pushing the boundaries oh what exactly constitutes a tea, and every now again I’ll throw in a cup of coffee.

So how fitting is it that I take it back to another familiar face and friend, Baltimore Coffee and Tea.

This week I take it to the Odenton, MD location, which is a first time for me.  The area is quiet, it’s connected to residencies and is part of one of the many towne centers you see popping up in every town or any location that has enough people that developers see the need to justify a towne center.  While many look the same, this location and it’s surroundings does feel a bit more charming and cozy.  There’s lots of green and trees in the vicinity, which is always a good thing.

The beverages I’ll be reviewing today were based on a simple question, ‘have you tried these?’  Two out of three is pretty good, and before today that number was zero.

I’ll save the Hot Apple Cider for later in the year, if there’s time.  But the Dirty Pumpkin Chai is something I had to try.   It’s early November, the time is now or never.  More on that in a second. 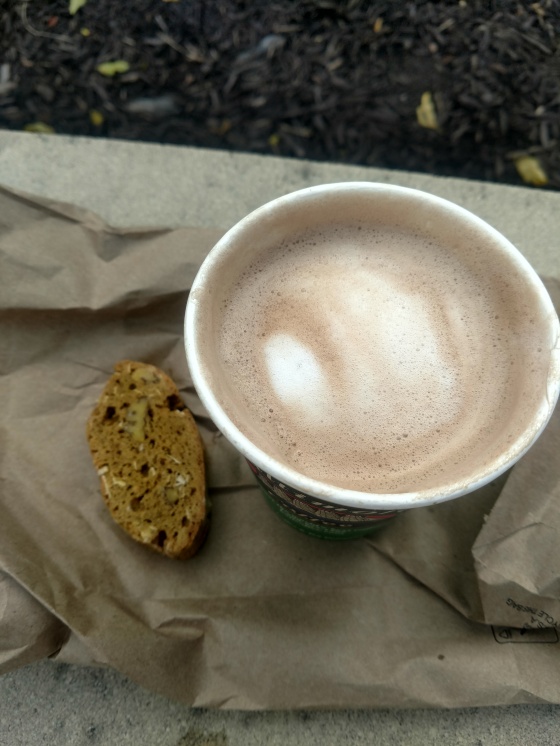 I like the chai but it’s not setting the world on fire.  There’s truly no need for any analysis. You know what you’re going to get.  I assume black tea and milk since it’s a chai.  But it could all coffee for all I know.  I’m willing to wager zero dollars that I tasted some cinnamon, nutmeg, and all your other fall essentials.  I enjoyed it with a pumpkin biscotti.   It’s great for now and it’s great until this limited time beverage ends.  But I know there’s better out there.

The Salted Caramel Mocha was way too rich for me.  I mean it’s coffee with stuff that I don’t usually have.   For the sake of trying something new, I wanted to try something new, but I could barely get any sips in before my stomach and my head began to ache.  There’s a lot more sugar in there than I can handle.  But again, just because I don’t care for it, doesn’t mean you won’t.  And I imagine I would be on the minority on this one.  No biscotti, or any pastry, was going to work with a drink like this.  But my cranberry and pistachi biscotti tasted great on its own.

But in the grand scheme of things, it doesn’t matter if these drinks are going to work for you or not.  I’m looking at the cup half full here and knowing that Baltimore Coffee and Tea has been good to me many times over the years, (previous stories can be found here) that a minor hiccup is not going to change that.

I made a comment about time earlier.  Because I feel (and I’m inclined to believe many others such as yourself might too) time is moving rather quickly, and there’s so many teas I want to talk about..  I may make more than just my weekly post as we head towards Thanksgiving and Christmas.  I’ve been introduced to different teas, discovered different teas, drinks, and similar entities that I feel a weekly post may not be enough.  So I hope to take this further if I can make the time.  And that’s something that can be easily done.  Yet I still have to make the time for it.

Have a blessed one.